An Olga Taussky-Todd Lecture has been held at each ICIAM Congress, since ICIAM 2007, under the auspices of the International Council on Industrial and Applied Mathematics. 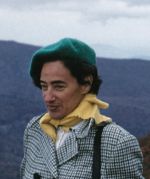 This honor is conferred upon a woman who has made outstanding contributions in applied mathematics and /or scientific computation. The name of this lecture pays tribute to the memory of Olga Taussky-Todd, whose scientific legacy is in both theoretical and applied mathematics, and whose work exemplifies the qualities to be recognized.

Olga Taussky-Todd's legacy is international, as her career spanned both Europe and North America. Her research helped to establish linear algebra and matrix theory as a research area in mathematics, and her varied appointments, including positions in both academia and government laboratories, set an example for applied mathematicians. Her support and encouragement of younger women mathematicians is warmly remembered in the community.

In 2008 it was adopted by the ICIAM Council as a permanent feature of ICIAM Congresses. Beginning with the 2023 congress the OTT lecturer will receive an honorarium of 5000 USD, will not pay the registration fee to the congress and will have her travel and living expenses covered by the organizers.

For the first award in 2007, special consideration was given to research in one of the areas in which Olga Taussky-Todd worked: applications of number theory, linear algebra or numerical analysis.

Lecturers are selected by the Olga Taussky-Todd Committee.