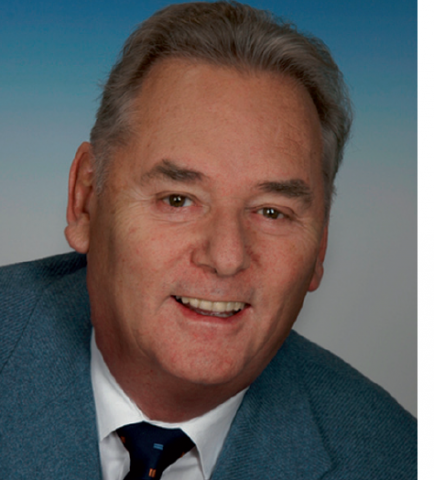 Professor Dr. Reinhard Mennicken, born March 16, 1935, in Cologne passed away on Thursday, June 13, 2019, at the age of 84 years. He received his PhD in 1963 under the supervision of Professor Dr. Friedrich Wilhelm Schaefke and his Habilitation in 1968 at the University of Cologne. From 1971 until his retirement in 2000 he held a chair at the University of Regensburg and in between, in 1974/75, at the Technical University Braunschweig. As a mathematician his research focused on differential equations and spectral theory, with special emphasis on applications in engineering and physics.

Reinhard Mennicken gained wide international recognition by serving as Secretary, President and Vice-President of the Gesellschaft fuer Angewandte Mathematik und Mechanik (International Association of Applied Mathematics and Mechanics), GAMM, from 1988 to 1998, as President of the International Council for Industrial and Applied Mathematics, ICIAM, from 1995 to 1999, as Editor of GAMM Mitteilungen and ZAMM, and as Editor-in-Chief of Mathematische Nachrichten for 20 years from 1992 to 2011. He organized and co-organized numerous large international and national conferences, including the Annual Meetings of the GAMM in 1984 and 1997, of the Deutsche Mathematiker Vereinigung (German Mathematical Association), DMV, in 1988, the International Symposium on the Mathematical Theory of Networks and Systems, MTNS, in 1993, the International Workshop on Operator Theory and Applications, IWOTA, in 1995, all held in Regensburg with several hundreds of participants and peaking with ICIAM 1995 in Hamburg with more than 2000 participants, jointly with Professor Dr. Oskar Mahrenholtz. Reinhard Mennicken enjoyed the work for ICIAM/CICIAM because of its interdisciplinarity and internationality and dedicated a lot of time and energy to it. Together with the first President of ICIAM, Professor Roger Temam, he succeeded in adding several other societies as members and associate members of ICIAM.

After the fall of the Iron Curtain in 1989 Reinhard Mennicken was a key player in establishing fruitful collaborations with mathematicians from the former Soviet Union with the support of Deutsche Forschungsgemeinschaft, DFG, and Deutscher Akademischer Austauschdienst, DAAD. He attracted three Humboldt Prizes to the University of Regensburg, awarded to Professors F.V. Atkinson, I.C. Gohberg and M.A. Krasnosel'skii.

Reinhard Mennicken had one daughter and three sons, one of whom holds a PhD in mathematics as well, as well as two adopted children. Academically, he had 15 PhD students four of which hold professorships, two in Germany, one in South Africa and one in Switzerland. My sincere thanks go to Professor Mennicken as my academic teacher, for all that I learned from him over many years since I first attended one of his seminars more than 30 years ago.

Upon requests from international colleagues, a condolence website has been set up to commemorate Reinhard Mennicken and share photos:
https://www.gatheringus.com/memorial/professor-dr-reinhard-mennicken/1078

Special thanks go to Dr. Marilene Balbi without whom I and many colleagues would not have learned about this loss and to Dr. Joerg Mennicken for finding the memorial site above.

About the author, Christiane Tretter: Christiane Tretter holds a Chair at, and is Director of, the Mathematical Institute at the University of Bern, Switzerland. She received her doctoral degree at the University of Regensburg, Germany, in 1992 under the supervision of Reinhard Mennicken. Her research areas include spectral theory, differential operators and mathematical physics. She is Editor-in-Chief of the journal Integral Equations and Operator Theory.

Christiane Tretter holds a Chair at, and is Director of, the Mathematical Institute at the University of Bern, Switzerland. She is Editor-in-Chief of the journal Integral Equations and Operator Theory.