This year’s ICIAM meeting in the Spanish city of Valencia featured a panel on careers in mathematical sciences in academia and industry. Panelists came from a broad range of backgrounds and institutions, representing the diversity of ICIAM: Volker Mehrmann, President European Mathematical Society; Jill Pipher, President of AMS, Department of Mathematics at Brown University;  Ami E. Radunskaya, Past-President of the Association for Women in Mathematics; Wil Schilders, European Consortium of Mathematics in Industry (ECMI); Sven Leyffer, Secretary of ICIAM, who works at Argonne National Laboratory. The panel was organized by Carlos Vázquez, member of SEMA and professor at the University of A Coruña.

For two hours, panelists discussed the present and future role of mathematicians in academia and industry, as well as possible improvements in the training of applied mathematicians to ensure a successful career in academia or industry. The panel session started with the panelists providing a brief outline of  their views on this topic, followed by a set of questions from the organizer.

Careers in the Mathematical Sciences: US

Jill Pipher reported on some of the data collected by the AMS: numbers and field distribution of Ph.Ds, career trajectories, demographic information, and trends in the mathematical and statistical sciences, This information is collected in annual surveys, is made available on the AMS website, and is published in the Notices. Notable trends included the slight but possibly significant decline over the past ten years in the percentage of Ph.Ds awarded to women, the continuing low numbers of under-represented minorities in the US receiving advanced degrees in mathematics, the growth in non-research faculty positions at research universities, and the surge of student demand for mathematics, computational and statistical sciences and computer science education relevant to careers in data science. For some years, the US job market for new Ph.Ds has offered many more postdoctoral positions in academia than it offers in follow-up tenure track positions. Some discussion was devoted to how mathematics departments could prepare students for the many rewarding non-academic careers. The SIAM Careers website was mentioned as a terrific resource for students eager to learn about specific sectors, jobs and companies that hire mathematicians.

Careers in the Mathematical Science: Europe

Volker Mehrmann reported on the large inhomogeneity in the job market on academic as well as industrial jobs in Europe. In some countries the market is almost empty so every candidate has many options in industry while in other countries there are no jobs at all. Similarly in academia in some countries it is generally very good on the assistant professor level but harder but good on the level of higher positions while in other countries there are almost no reasonably paid positions at all. EMS and EU-Maths-In[1] provide job portals and many of the national societies are very active in this respect. Many actions are taken to involve more young scientists in the societies and also to change the gender imbalance but also here the situation is very inhomogeneous in Europe and this leads to a lot of south-north movement, in particular of young scientists.

Careers in All Sectors

Ami Radunskaya noted that we need mathematicians everywhere, in all sectors of society.  For example, teaching mathematics to young people is critical, and should be a valued career trajectory.  Mathematicians also play a role in policy-making, medicine, the energy sector, and decision-making in almost every area of endeavour. It is our role as professional societies, and as individual mathematicians, to expose our broader community - our children, our neighbors, our business-people, our politicians - to the usefulness and joyful playfulness of mathematics. A better awareness of the role of mathematics in society could also encourage more participation from those groups currently under-represented in the field.

Sven Leyffer reported on careers with the US and European national laboratories networks. There are 14 Department of Energy labs within the US, and similar numbers of institutes such as the Max-Planck[2] and Frauenhofer[3] Institutes in Germany, the INRIA[4] institutes in France, and Rutherford Appleton laboratory in the UK. The US labs offer a range of opportunities for young mathematicians (open to applicants from most countries) such as student internships and postdoc fellowships, including prestigious named fellowships such as the Alvarez[5], Householder[6], John von Neumann[7], and Wilkinson[8] fellowships. Hiring of new staff is often done from the pool of former students and postdocs. Staff members tend to work on 100% soft-money projects, collaborating with domain scientists and computer scientists. These projects are often large multi-institutional, multi-disciplinary projects requiring the ability to both assimilate new information quickly and to communicate well with other domain scientists. Current applications include power-grid, data analysis for physics experiments and beamlines. Unlike academic job environments, the labs place special emphasis on developing open-source production-quality software running on HPC systems. Sven expects future projects to pivot towards artificial intelligence and machine-learning for physics-based models, as well as heterogeneous and emerging compute-architectures, such as quantum, neuromorphic, and low-precision devices.

Careers in Mathematical Sciences to Industry in Europe

Wil Schilders, president of EU-MATHS-IN (www.eu-maths-in.eu) reported on the ways their organisation supports careers within industry. To this end, EU-MATHS-IN has a job portal on its website that is dedicated to mathematics jobs in industry. Here, students can browse job opportunities, and industry can post positions. Also, jobs related to the European Industrial Doctorate program of the European Union are posted here: these positions require that the PhD students stay a minimum of 50% of their time within industry. Wil, who spent 30 years in industry (Philips, NXP Semiconductors), also explains the dual ladder system that is used in industry: it is possible to pursue a career as a manager, but also as an expert (“fellow”).

Closely related to EU-MATHS-IN is the European Consortium for Mathematics in Industry (ECMI). This organisation has organized so-called the Studygroups Mathematics with Industry already for several decades and in many European countries. These cover one full week, starting with presentations of 5-6 industrial challenges. Then the mathematicians split into groups, working on the challenges all week, and presenting the results to the industries on Friday. It is one of the best ways to get involved with industry, and for the participating students it may lead to job offers and careers in industry.

Finally, Wil presented some scattered initiatives. One example is the “speed-dating with industry” event at the Dutch Mathematical Congress (each year), where students can talk to industry representatives about job opportunities and the type of mathematical work being used within the company. Also, the French network within EU-MATHS-IN, named AMIES, organizes job fairs each year, where 50-60 companies are present, as well as 1200-1400 students from all over France.

Following the initial presentations, the panelists engaged with an active audience on a range of questions raised by Carlos Vázquez, as organizer, and grouped around three main topics: Careers in MS (Mathematical Sciences) in Academia, careers in MS in Industry, and comparison between careers in Academia and Industry. Here, we summarize some questions and answers.

Carlos: Is the number of positions at Universities and Research Centers related to MS increasing worldwide?  Could you identify special topics? Could you mention any special ones beyond AI, IoT and Robotics?

Sven: Yes, just look at the growth in artificial intelligence and machine learning at Google, Microsoft, and the university centers being established throughout the US, such as Georgia Tech and Lehigh. Applied mathematicians can also find opportunities in Industrial Engineering, Statistics, Operations Research and Computer Science Departments.

Carlos: Is a PhD degree required for the kind of applied math jobs that you describe? In view of new topics arising in the industry, should new skills be incorporated to training programs at BSc and MSc?

Volker: Negotiation skills are important, as well as confidence in looking and asking for jobs.
Sven: Yes. Labs typically require a PhD as evidence for independent thinking and an ability to become a principal investigator on research grants. Other important skills are communication skills to be able to work in a multi-disciplinary environment. Mathematicians are  often hired for their analytical skills, not for specific knowledge in a narrow area. Over time, applied mathematicians in the national labs develop into Jacks of All Trades, branching out into new areas.

There was discussion, prompted by the audience, about gender bias in hiring. It was suggested that our community might “equify” the job-application process.  For example, might job portals enable gender blind applications by only reporting first and last initials of applicants?  Could recommendations be anonymous?

Carlos: Talking about money, are salaries in the industrial positions much higher than in academic ones? Is this important for the decision to follow either an industrial or an academic career? Is a career in academia less risky than in industry? How easy is it to move from industry back to academia? Can we help lower the barrier for moving back to academia and research?

Sven: Salaries at the national labs are typically competitive with industry, especially in applied mathematics, where salaries are closer to computer-science salaries. Coming back from industry to academia is often easier in Industrial Engineering departments or national labs, which have a culture that is more similar to industry.

Volker: In the EU there exist Industrial Mathematics Professorships which are often filled with candidates who have had industrial experience. Postdocs from labs also often move back to academia, and in some cases there exist joint appointments with emphasis on industry.

Wil: It is often difficult to move from industry to academia, and usually happens only late in one’s career. In many cases the academic appointments in The Netherlands are for 1-2 days per week (speaking from his own experience of coming back from Philips). If you want to come back to academia from industry, then it is important to keep your academic profile updated by attending conferences, and publishing papers whenever possible.

In his closing remarks, Volker encouraged the audience to appeal to the ICIAM member societies to improve the situation for applied mathematics by putting more effort into support, advertisement, and education of young scientists. He mentioned that several recent studies have shown that the contribution of applied math to a country’s GDP is 15-25%, which should be a good basis for a healthy profession.

After two lively hours, Carlos closed the meeting by specially thanking all the panelists, as well as the audience for their presence and active discussions, providing interesting ideas and viewpoints. 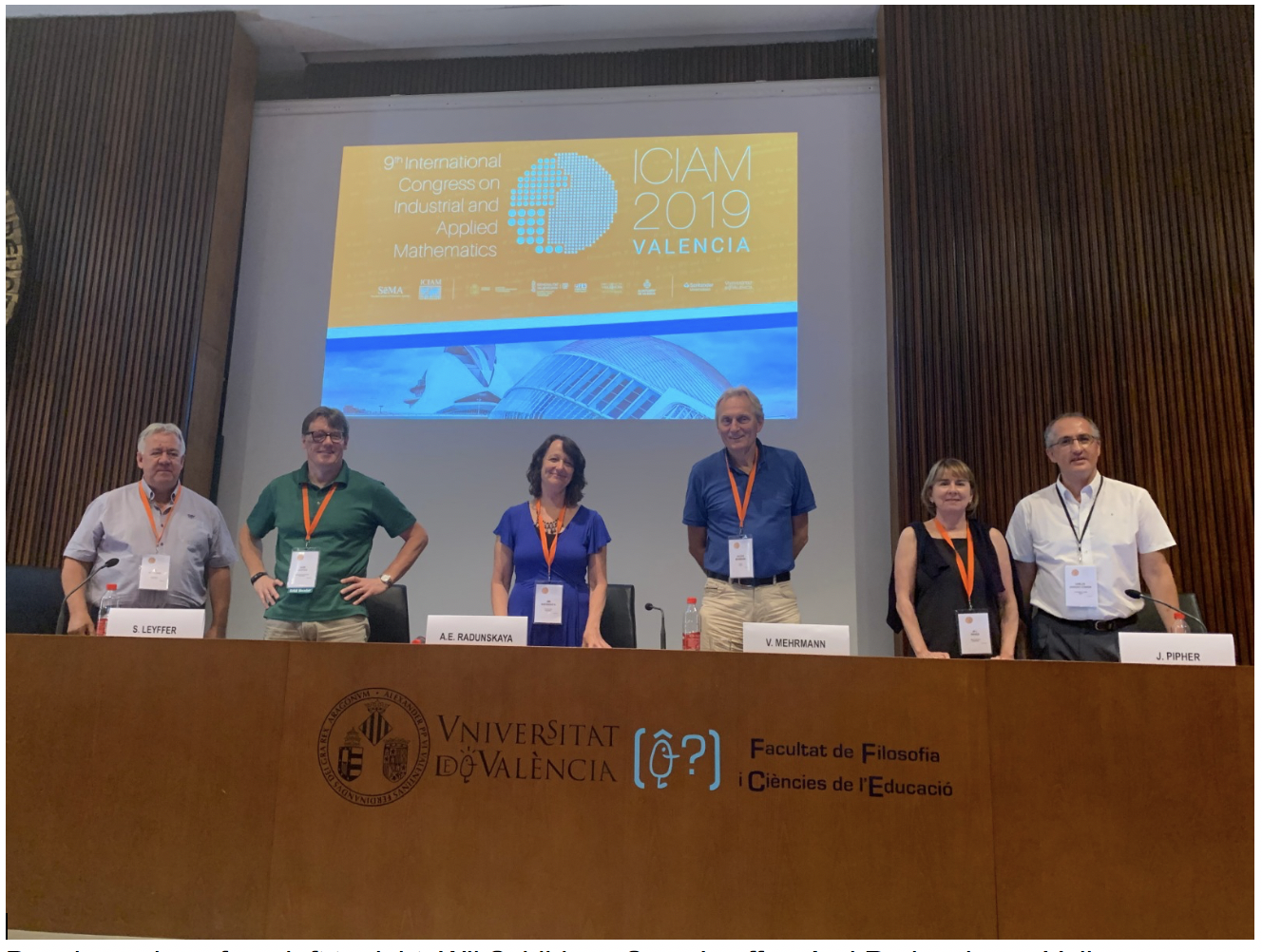