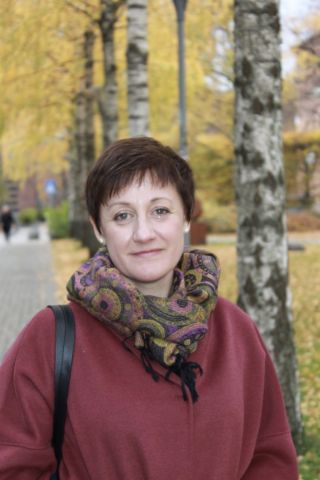 Natalini: How did you decide to become a mathematician? What has been the influence of your parents?

Di Nunno: Still during the last year of high-school I did not have clear ideas of what my path could be. I have always been eclectic with interests and I was attracted by very different fields and directions. Of course, I was discussing with my parents, but they have always given the same happy advice: whatever you choose, choose because you like it and you think you will be happy! So, this was it. I remember I was traveling from Milan to Paris for pleasure and, while on the train, I was studying the various university brochures. Well, when I came to the one in mathematics, I got trapped. Not because it was fancy, actually the least marketing oriented of all the pamphlets, not because it was revealing well what all it was about, actually the format was quite dry, but it was hinting towards mathematics as the common element of all I was attracted to. So, there it was. Decision made.

Natalini: Could you mention some people who have been important for your earlier education?

Di Nunno: Surely my parents have played a very important role. One is a linguist who taught me to be open to all diversities of minds and languages. She did recognise mathematics as a language in itself, thus worth studying. The other is an economist with a passion for history and archaeology, used at logical deductions, beauty, and search for truth. Together with my sister they have been always very supportive. Some of my teachers in mathematics were presenting the subject in a nice way, without hiding the important critical points, but tackling them directly in a true yet sometimes entertaining way. I’m still in contact with some of them. Last but not least, the headteacher at my high-school, though specialised in literature and classical languages, she was a tough lady who introduced the study of advanced mathematics and physics at an earlier stage in an experimental program. She was an example of someone visionary enough to be able to anticipate her times and persistent to build projects and programmes from scratch. It is probably the program she designed that bought me closer to sciences. 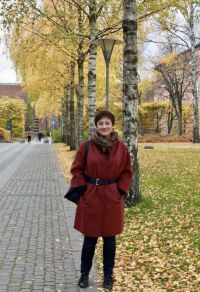 Natalini: Why did you decide to leave your country to live in Norway?

Di Nunno: Well, that was not really planned as such. I first visited Norway after an invitation to give a seminar there. That was during my PhD studies. Then a research collaboration started and I visited Oslo for a longer period. It has always been very pleasant to stay there. So, when the time came to make applications for jobs, I did apply to several posts in Italy and in Europe, which I had visited and not. Finally, the position in Oslo turned out to be very appealing. So, I got started without any plans for how long I would stay. But I liked it, and I still do.

Natalini: Being a woman has been a problem for choosing mathematics as a profession? And in your career?

Di Nunno: I have never thought that any profession was not possible for women. That’s the way I was brought up and the environment I’ve been growing in. It was only much later, during PhD studies, that I actually realised that not many women were around and that it would have been better to have more. In general, I have always found myself well in the working environment I visited. Though I must admit that there are some exceptions, where there is still much of a disbelief when a woman is introduced as a full professor. It seems that this is due to a prevailing social belief with substantially more rigid gender roles and expectations, that leads to thinking that women are not as capable as men in mathematics and science. It takes strong efforts at many levels to change this.

Natalini: What have been your main directions in research? Why did you choose these directions?

Di Nunno: I’m working in stochastic analysis, which is using both techniques of analysis and of probability. After the fundamental contribution of Kiyosi Itô in the 40s, the area has grown impressively, becoming an independent field of mathematics, with a frantic development during the last fifty years, in view of the many applications to economics, biology, and natural sciences. Indeed, stochastic analysis is all about the mathematics for the time development of phenomena driven by chaos. Within the field I have worked mostly in stochastic calculus, studying the role of information in the different integrals and stochastic differentiation. I have applied my work in optimisation problems generated by finance and economics. The choice of the field came out gradually already at university, where I had chosen at first the direction of analysis. However, I included a course in stochastic processes, which really fascinated me, so I decided to shift direction and entered the world of probability. I came to appreciate the power of probability and analysis joined together already with the work on my master thesis, then I continued further.

Natalini: What is your best achievement in research? Could you explain in layman's terms its meaning?

Di Nunno: One of my early results that I really do appreciate still and that is easy to explain is the introduction of the non-anticipating stochastic derivative. Indeed, stochastic differentiation is such a recent invention compared to the concept of differentiation in analysis. To explain, one has to think that a stochastic process has in general not differentiable paths. Thus there is no chance to translate the classical concept of differentiation to stochastic processes. In fact, even the stochastic integral (Itô integral) is defined as a class of functions. Then the non-anticipating derivative is introduced as a formula that gives the integrand under the integral sign. As an operator, it turns out to be the dual of the Itô integral. Differently from other types of derivatives, the non-anticipating derivative is well-defined for the very large class of integrators called martingales. As for its use in applications, let me give an example coming from the hedging of financial risks. If one has taken up a risk at some future time, for example the uncertain outcome of a financial position, then one would like to find a hedging strategy allowing to come as close as possible to this risk value, so to be able to minimise the exposure to risk. Well, the non-anticipating derivative helps to describe such optimal hedging strategy, when the minimisation or risk is set in terms of variance. 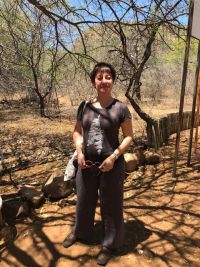 Natalini: Recently, you have been awarded with the ICIAM Su Buchin Prize, which is intended to provide international recognition of an outstanding contribution by an individual in the application of Mathematics to emerging economies and human development, in particular at the economic and cultural level in developing countries. Could you explain what kind of activities have you pursued to deserve this Prize?

Di Nunno: My activities in the developing countries have been substantially concentrated in Africa. I have been involved in different projects mostly related to capacity building in the academic institutions and dealing with the quality of the education and research programs at university. I have been visiting several countries of this beautiful continent both within the framework of some project and also on direct invitation by some colleagues there. So, I have been holding courses and supervising students at different African Universities. In 2011 I was appointed as member first and then chair of the Committee for Developing Countries of the European Mathematical Society. During these eight years, the committee has put up a series of activities to promote the quality and the visibility of those centres in developing areas that are doing outstanding work in research and in the education of students within their country and also at international level. We have started the so-called ERCE Emerging Regional Centres of Excellence label, which is a recognition given by the EMS to these centres. Still with this committee we have worked for a program, with Simons Foundation funding, supporting the development of the individual academic path of African researchers, with particular attention to younger researchers and female scientists. These are still running programs. At present, I am involved in different ways in the international organisation CIMPA – Centre International des Mathematiques Pures et Appliqueés and in the Swedish, ISP – International Science Programme.

Natalini: Why have you started to be concerned with the education of young African mathematicians?

Di Nunno: When I moved to Norway, the Department of Mathematics was already heavily engaged in a Norwegian funded program in capacity building directed by my colleague Bernt Øksendal. I liked the program and I started taking an active part by supervising some master students from Zimbabwe. This program brought me to meet many mathematicians working in the Southern African region, opening up for further new joint collaborations. Some of the students that took part to that first Norwegian program are now having fixed academic positions. We have then started other programs, the last of which was based in Dar-es-Salam, Tanzania. One nice common aspect of all these programs is that they were involving a network of African countries, thus promoting collaboration within African institutions, while at the same time, they were based and substantially run by the hosting institution.

Natalini: What are the main necessities, according to your experience, to improve the economical and cultural situations in Africa?

Di Nunno: The question is broad and difficult. First of all, we have to pay attention to the fact that Africa is not one country, but many and very different economically and culturally from each other. So, necessities are different and with different urgency. At a general level and from an academic perspective, I can say that there is often a problem of capacity in terms of variety of fields represented at each institution and also of level of mathematical research carried out. There are countries where brain drain is systematic, countries that are largely populated and the efforts of few individuals seem never enough, there are countries so vast that the universities have campuses thousands of kilometres away from each other with logistic challenges. I’m talking about academics, because from a development perspective one should not underestimate the importance of its development. Indeed, I see the possibility that each country has to educate one’s own leaders at the highest level as the guarantee of the long-lasting self-standing success of any other development program. To explain with an example, all the efforts put in urgent health programs in the more remote areas, in clean water say, may have little impact in few years if the country leaders and local investors do not have the ability of analysing, evaluating, quantifying, designing, building, maintaining, the clean water pipe grid of extraction, filtering, and distribution. As we know mathematics is crucial in many theoretical and applied areas. Human resources in terms of expertise is an investment for all countries. So much valid for African countries as well.

Natalini: How do you balance your commitment in Africa with your academic life?

Di Nunno: It takes some good planning indeed, particularly when it comes to travelling. However, the good thing about mathematics is that one can do it everywhere.

Natalini: Finally, a last general question. What do you wish for Mathematics, and in particular for African Mathematics in 2019?

Di Nunno: To be rich, deep, varied, and visible.

Roberto Natalini received hisPhD in Mathematics from the University of Bordeau (France) in 1986. He has been director of the Istituto per le Applicazioni del Calcolo “Mauro Picone” of the National Research Council of Italy since 2014.