The organization of which ICIAM was an "Affiliate Member", ICSU (the International Council for Science), merged in 2018 with the International Social Science Council to form a larger council, the International Science Council (ISC). We are one of 30 Affiliated Members of ISC (according to the ISC Statutes, "affiliated members pay dues but have no voting rights" (and, it appears from the statutes, are not entitled to present candidates to hold office - that is, we have no part in the governance of ISC). Our somewhat inferior category of membership, not so incidentally, means paying much lower dues than Member Unions and Associations (there are 40 of these; the IMU is an example) or Member Organizations (numbering 135; these are national academies or national research councils), which, of course, typically have much larger budgets than does ICIAM.

Although ICIAM's ability to influence the overall direction and mission of ISC is thus limited, we are regularly consulted about the activities of ISC, and we are often invited to propose candidates to participate in or review its many activities. It was because of the possibility of engaging more applied mathematicians in these activities, and because of the potential interest of some of our members in the intersection of science and policy that is the focus of ISC's activity that ICIAM initially joined ICSU, and this potential remains. To see what is involved here, and to explore ways of realizing this potential, this document attempts to outline what ISC actually does.

The ISC's vision statement (from "About Us"):

The vision of the Council is to advance science as a global public good. Scientific knowledge, data and expertise must be universally accessible and its benefits universally shared. The practice of science must be inclusive and equitable, also in opportunities for scientific education and capacity development.

And their mission statement (same section):

The mission of the International Science Council is to be the global voice for science; a trusted voice that speaks for the value of all science by:

On the page "What we do", ISC gives more detail:

The Council convenes the scientific expertise and resources needed to lead on catalysing, incubating and coordinating impactful international action on issues of major scientific and public importance.

The organization breaks its work into three categories (it is unfortunate that they refer to these as "principle" areas, although this misspelling is corrected on another page):

The third bullet is clear, and explains ISC's willingness to write letters protesting government suppression of free scientific expression or practice, or to protest statements and actions that demean certain groups of scientists (women, international scholars), as well as to monitor dishonesty and fraud among scientists. The first bullet emphasizes the international component of the mission; although it is unclear how a small-budget organization will support scientific research at an international level, it can certainly play a role in bringing an international perspective to ongoing research. The communication mission is also clear: uncovering the science and finding conduits to bring this information to policy makers is a legitimate task. The second bullet is somewhat vague, but might include topics like publication models ("open access" for example) that have implications for the conduct of science worldwide.

The overview page (https://council.science/what-we-do) does give a list of areas in which ISC is active: global  sustainability, poverty, urban health and wellbeing and disaster risk reduction, data, observing systems and science advice to governments.

ISC's annual budget is roughly 8M € (Euros) - they expect to run a deficit of ~400,000 € in 2019. Sources of income are given in the following table (extracted from ISC's budget document, sent to all member organizations): 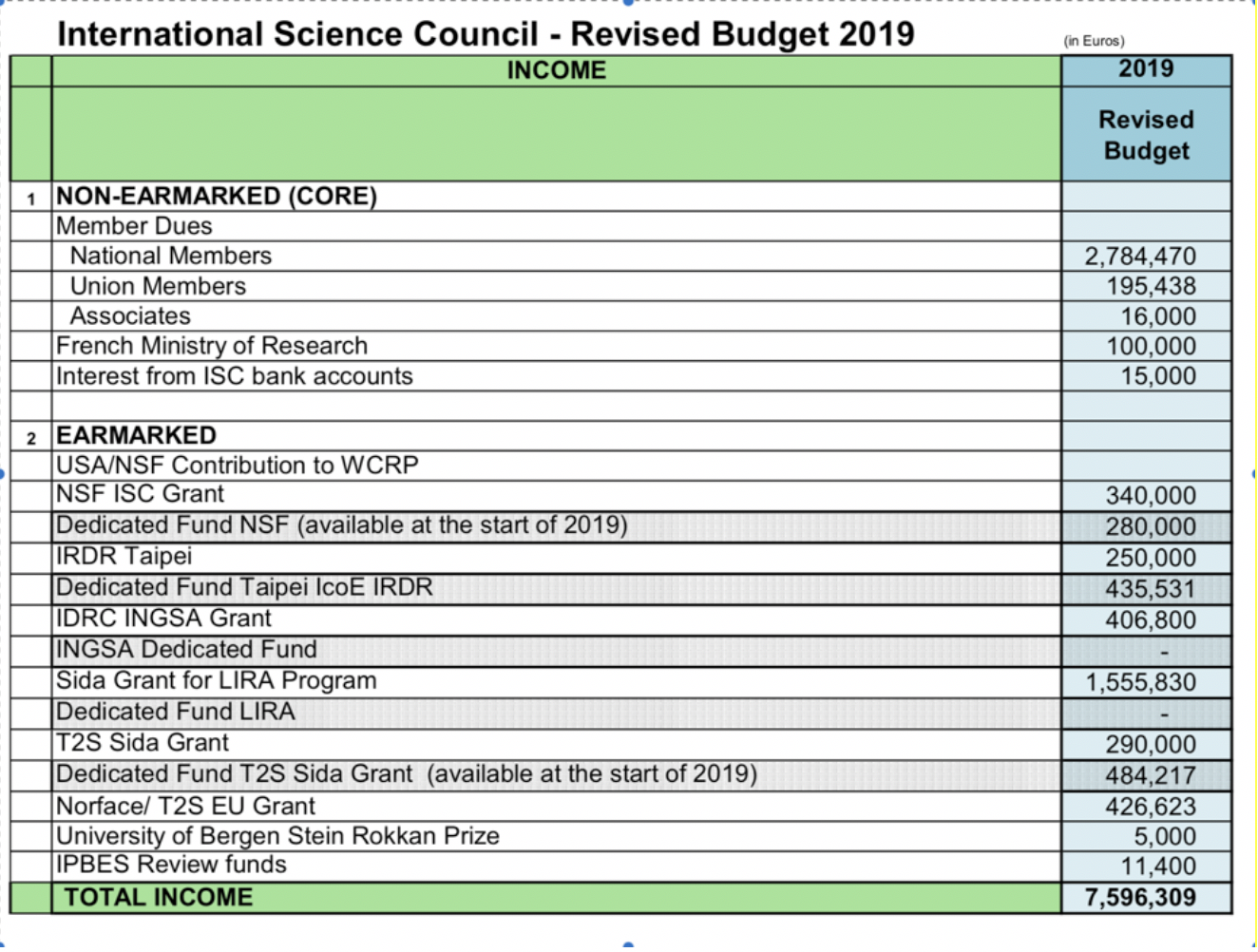 Of this, about 3M € goes to staff and administrative expenses; this is about the amount brought in in member dues. Major activities are funded by grants ("earmarked" funds), and these form the bulk of income. The part of the budget that deals with research projects is reproduced at the end of this article.

The list of programs carried out by ISC is also given under this heading ("What We Do"), and the titles fall into seven groups: Research Programs, Work at the UN, Freedoms and Responsibilities of Scientists, Funding Programs, INGSA, Science International, and ISC in the News. Here is the list, with all the subprograms 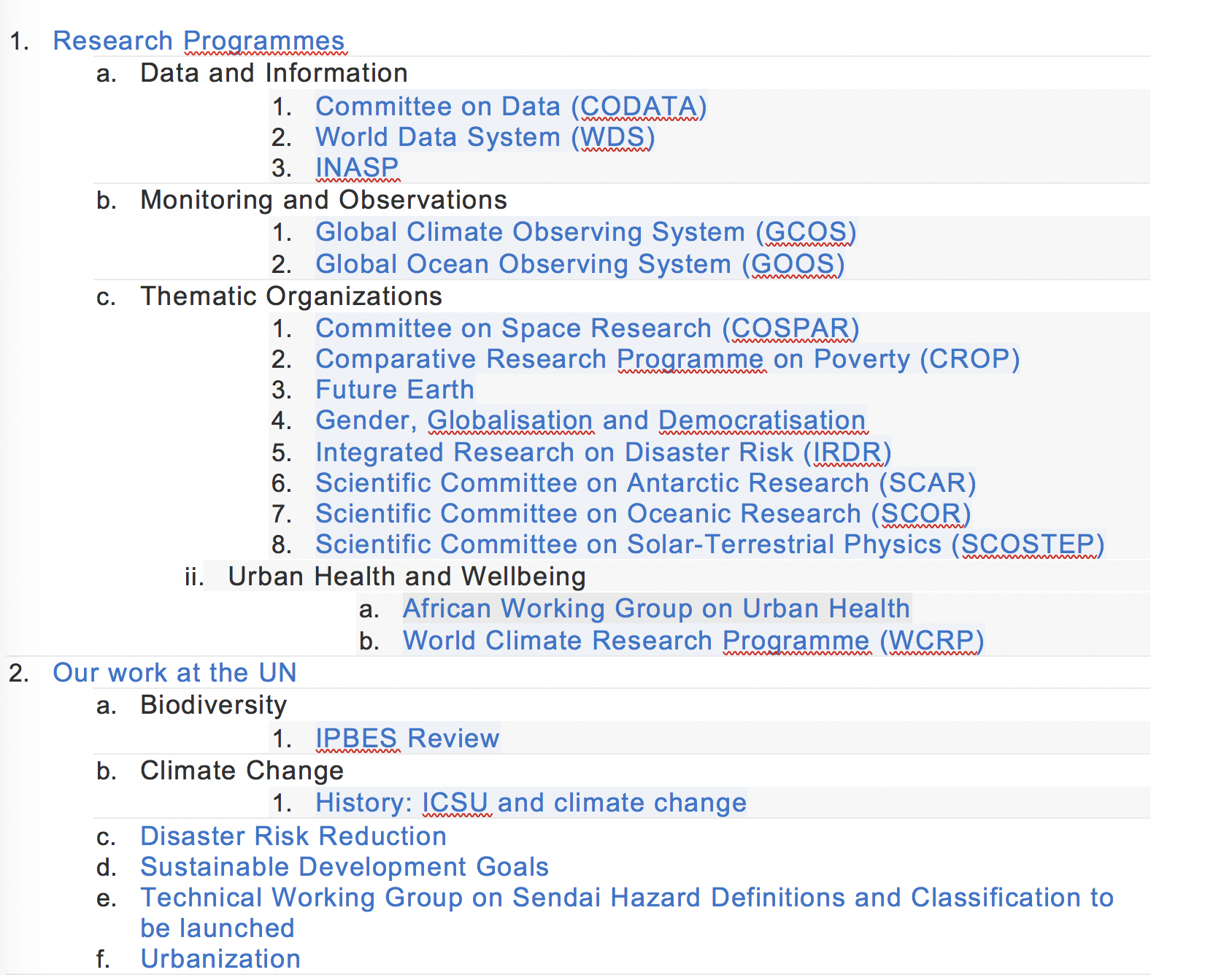 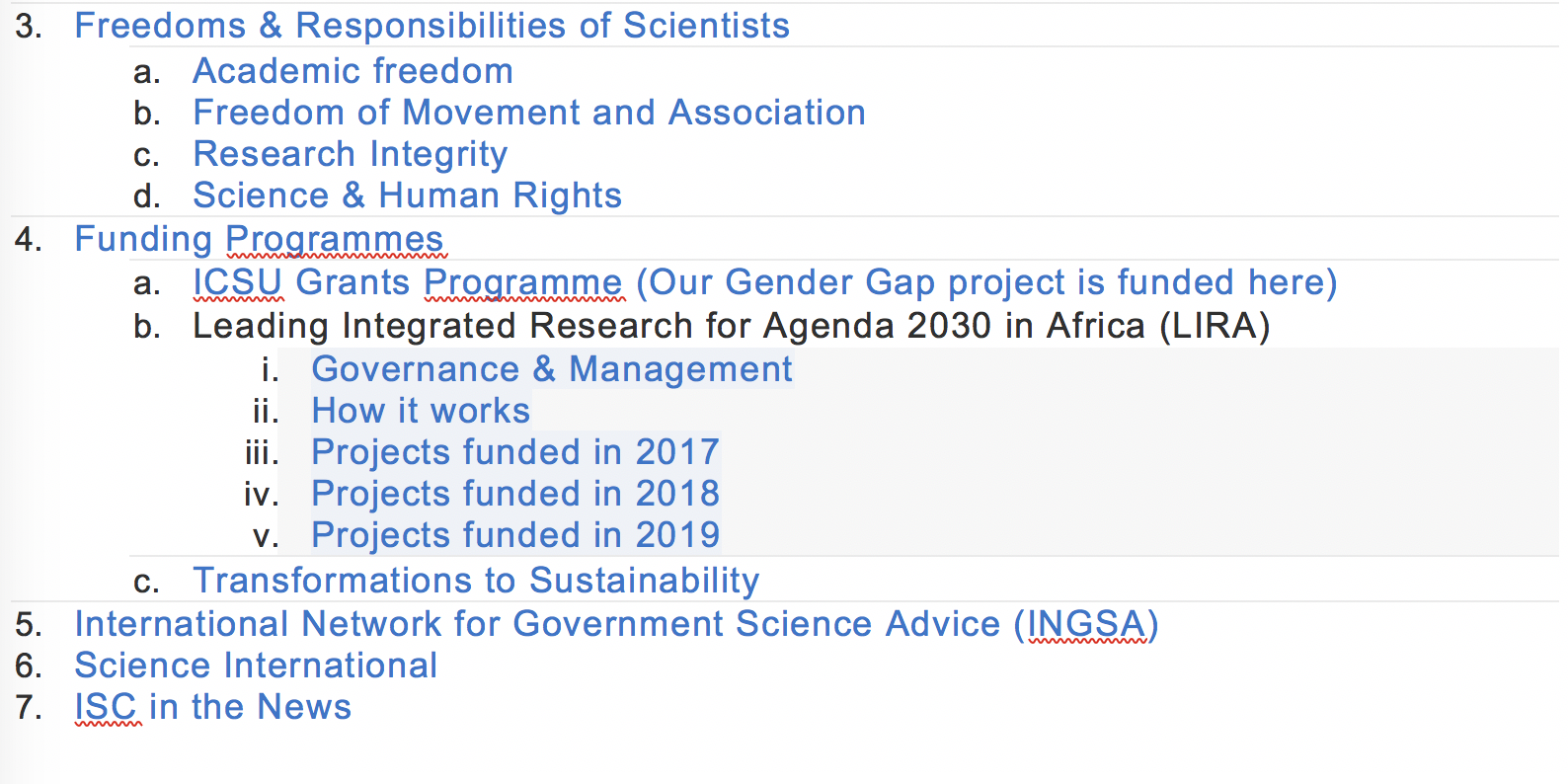 Just as a note: These are all hyperlinks on the web page, and some of them are out-of-date. For example, the "ISC in the News" section is just a list of references to ISC (or ICSU or ISSC) in the conventional or online press, but some lead to redirects, and some require a subscription to the journals where the articles appeared. Clicking on the project " Gender, Globalisation and Democratisation" (1.c.4) takes one to a web page that was last updated in December, 2010. This was an ISSC project, and there are many reasons that a project can fail to run to completion (lack of resources, change of direction of the PI, and so on), but one hopes that in time the ISC staff will clean up this list and put projects that are no longer active in an archive.

ISC also operates three regional offices (RO's): Africa (ROA), Asia and the Pacific (ROAP), and Latin America and the Caribbean (ROLAC). They receive funds from ISC for staffing (~225K €). One guesses that these offices exist in part to ensure that ISC's priorities are not dominated by those of Europe and anglophone North America, and that scientists from the regions they represent become involved in ISC activities.

Because ISC is still in the process of reorganizing itself, its website (from which most of this information was obtained) is currently incomplete and changing. However, we were recently sent the 2019 Budget of ISC, and, using this as backbone, I have put together an outline of ISC's principal operations. The relevant pages from the budget document are given in the Appendix.

Here is a look at some of the largest projects (by budget).

As the list of programs given above suggests, there are a large number of projects, committees, and joint programs in which ISC has a part. Some of these, for example the Scientific Committee on Antarctic Research (SCAR) themselves have a good deal of structure, and maintain their own websites that describe their governance, projects, personnel, and subcommittees. It is unclear in many of these projects what is the level of activity, whether there is paid support staff, whether they operate by additional grants, and what their budgets are. Nonetheless, I hope the descriptions above give some indication of the scope and purpose of ICS activities.

The following tables, from ISC's budget document, give some indication of the scope of the different activities carried out under ISC's direction. 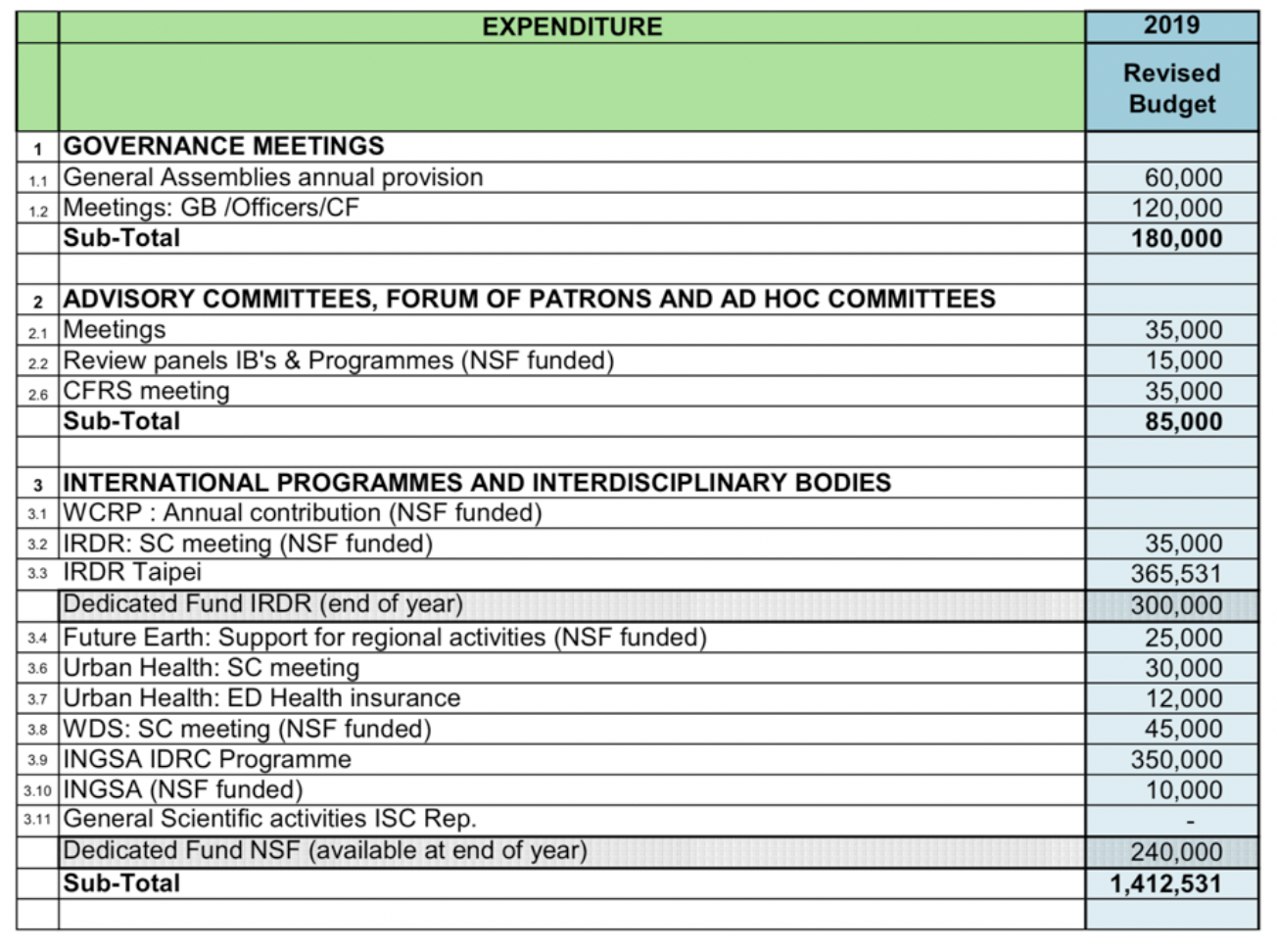 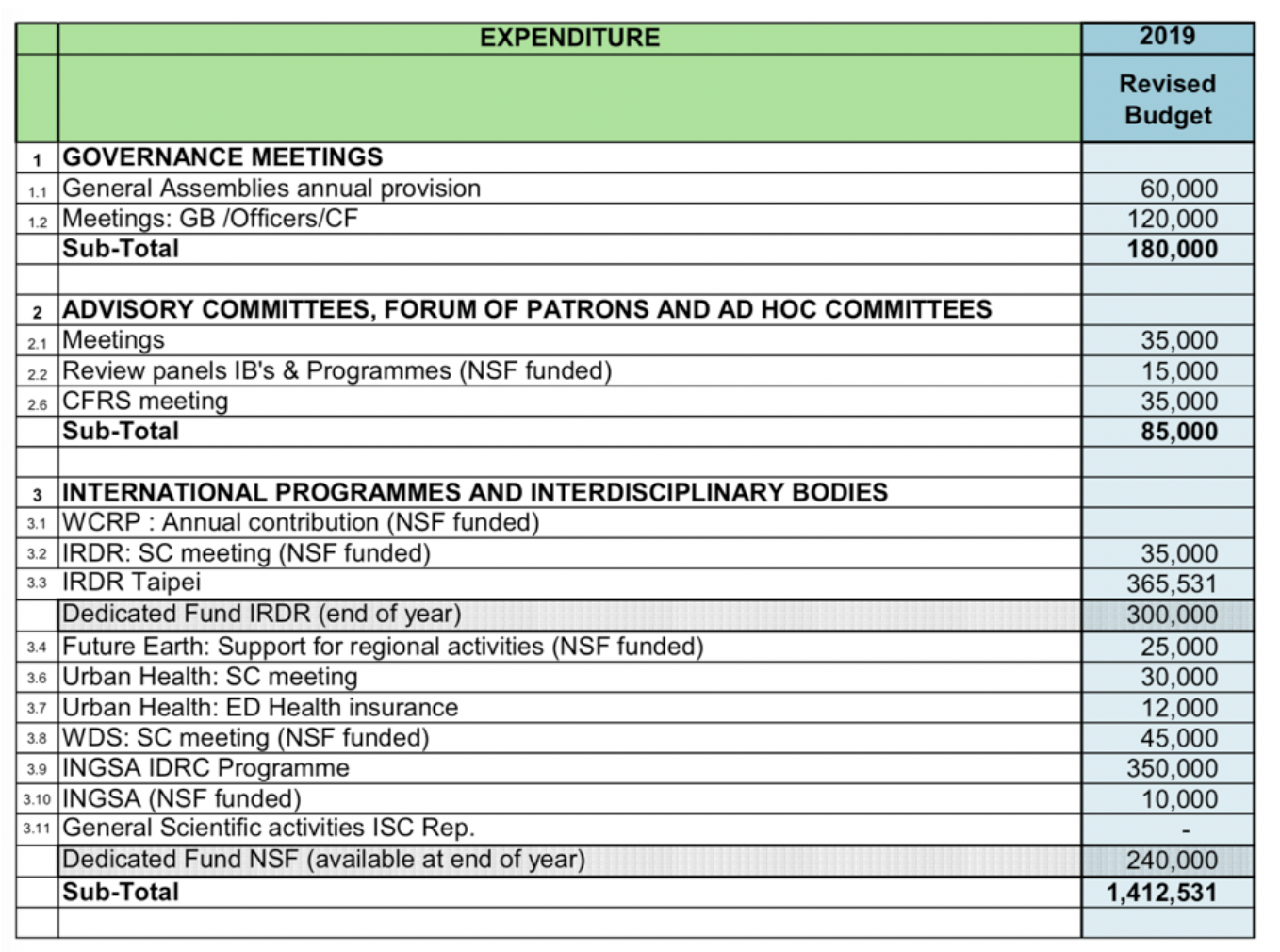 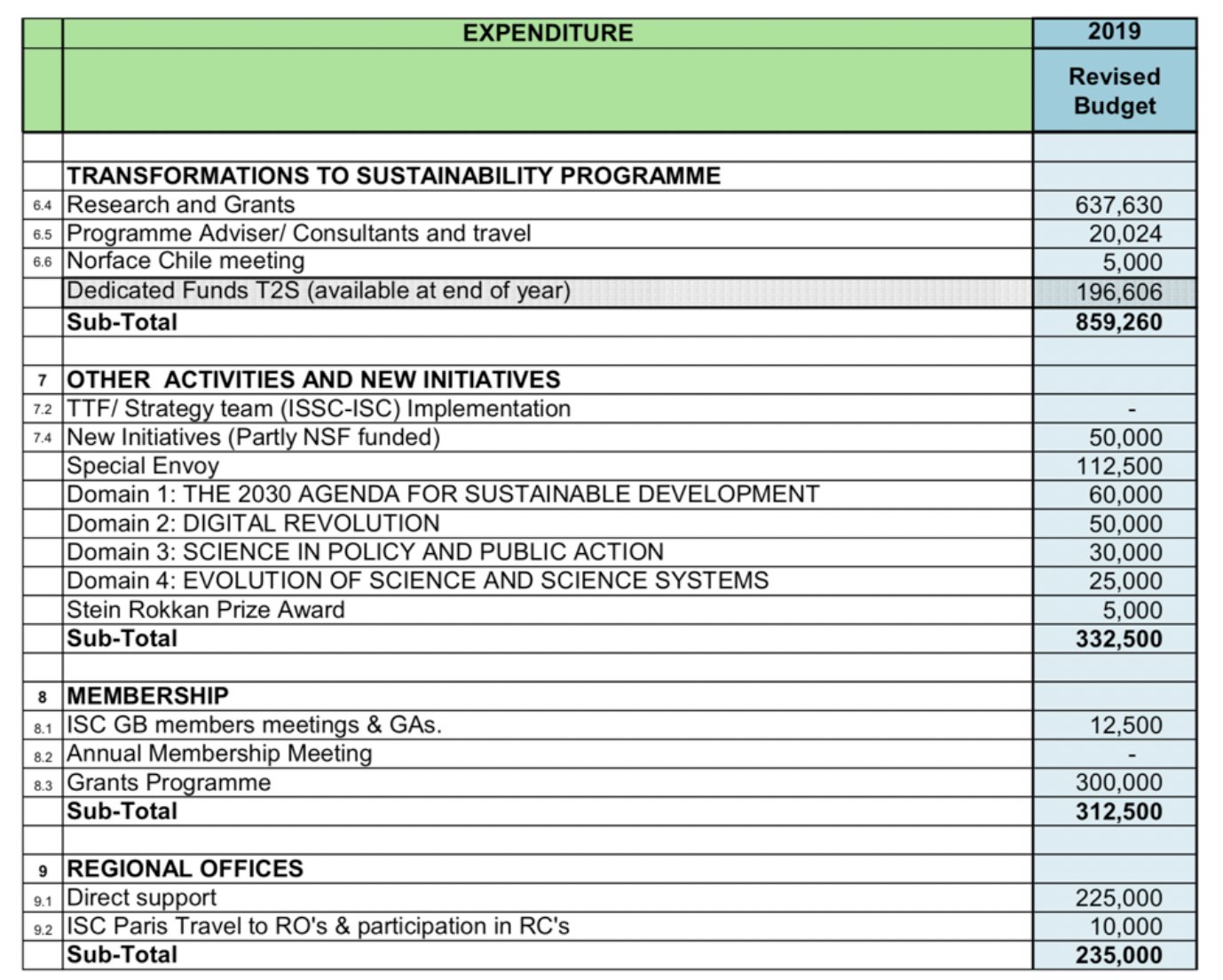 In Part 2, we will discuss ways in which ICIAM members can participate in ISC activities.

Barbara Lee Keyfitz is Professor of Mathematics at The Ohio State University. She has a PhD from New York University, and works in the analysis of partial differential equations. She is a Past-President of ICIAM, and Editor-in-Chief of ICIAM Dianoia.