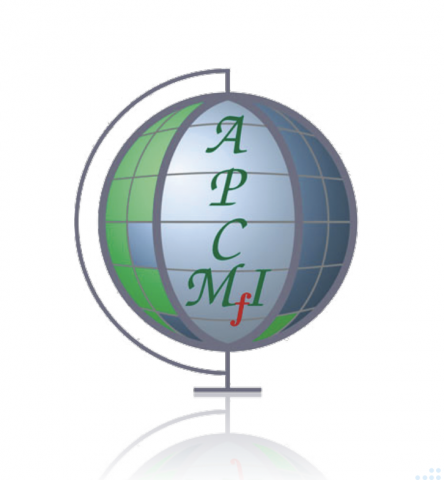 Over the last decade there has been general agreement and support in the Asia-Pacific region to have regular industrial mathematics exchanges, conferences, internships, etc, which build on the activities already occurring.  Over the years since the concept of an Asia-Pacific Consortium of Mathematics for Industry was first proposed, and more recently when planning to formalize such possibilities, there has been strong support and encouragement from colleagues in China, Hawaii, Korea, Malaysia and Singapore, as well as in Australia, New Zealand and Japan.

A small group, with the encouragement of various colleagues throughout the Asia-Pacific region, met in Canberra March 31 to April 2, 2014, to do the initial planning for the formation and launch of the APCMfI with the emphasis being fundamentally Mathematics-for-Industry.  Those directly involved in the discussions in Canberra were (as pictured): Yasuhide Fukumoto (Japan), Zainal Aziz (Malaysia),  Graeme Wake (New Zealand). Alexandra Hogan (Australia), Masato Wakayama (Japan), Frank de Hoog (Australia), Geoff Mercer (Australia) - now deceased, and  Bob Anderssen (Australia).

Now, in 2020, it has 194 members across 20 countries, initially focussed on those in the GMT+8 to GMT +12 region, and most (54) are from Japan, from where this initiative was fostered and started [specifically, by the Institute for Mathematics-for-Industry (IMI) in Kyushu].  It has expanded widely.  Much of the  organisation and support is centred on the IMI.

Workshops, Study-Groups and Conferences are notified from the web-site https://apcmfi.org/.  The most regular annual event is the Forum:   Mathematics-for-Industry (FMfI), held usually in November.

The most recent international event was held in November 2019 at Massey University in Auckland, New Zealand.  Altogether, there were 65 attendees, including 11 from Massey, 15 from other NZ universities, CRIs and industries, 25 from Japan, and several from other Asian countries (Thailand, Korea, Malaysia and Vietnam) and Australia.  Themes are usually chosen by the host country.  This time rather appropriately NZ chose “Mathematics in the Primary Industries and the Environment”. A picture of the attendees is below, with Professor Masato Wakayama, Chair of the APCMfI) second from right in the front row, and Professor Robert McKibbin (Massey University & the Director of FMfI2019), fifth from the right.

The next FMfI was to be held in Vietnam this year (2020), but owing to the current pandemic crisis, it has been deferred to 2021.

Graeme Wake is Emeritus Professor of Industrial Mathematics at Massey University, New Zealand. He is a Fellow of the Royal Society of NZ, was awarded the ANZIAM Medal in 2006, and the Marsden Medal of the NZ Association of Scientists in 1999.